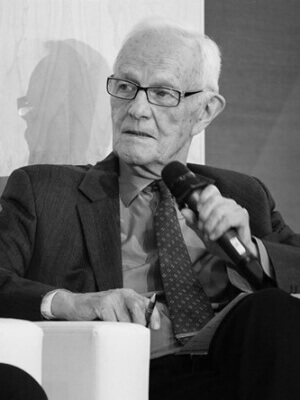 An outstanding scientist, an unquestionable authority in the field of transport and traffic engineering, a long-term employee of the Faculty of Civil Engineering at the Warsaw University of Technology, and at the same time a long-term, distinguished member of SITK RP.

Professor Wojciech Suchorzewski shaped the contemporary view on traffic engineering and planning of transport systems in Polish cities. He was the author of many excellent studies in the field of road traffic and the most important documents shaping municipal and state transport policy. His great achievements, huge commitment to scientific, design and expert work cannot be overestimated.

In 2006, the Congress of SITK gave him the highest dignity in the Association, the dignity of an Honorary Member. He was awarded the silver (1972), gold (1974) and gold SITK badge (2019) and the Aleksander and Zbigniew Wasiutyński Medal (1996).

He willingly participated in the organization of scientific and technical conferences in many SITK Branches, engaging his authority in the Scientific or Scientific and Program Committees of these conferences. He delivered papers on recently important topics in the field of urban mobility. For the SITK Branch in Krakow, which organized many conferences, he was a great support, authority, he was involved in the scientific preparation of the conference, he was also our great friend.

The last farewell to Professor Wojciech Suchorzewski will take place on November 21 this year. at 10.30 at the Powązki Cemetery.

Board of the SITK RP Branch in Krakow